The Nine Domes of the Universe

International restoration project in collaboration with the Department of Architecture

Of the magnificent mosque of Noh Gonbad, built in the eighth century in northern Afghanistan, and collapsed due to an earthquake a few decades after construction, there remains the perimeter of the outer walls, some columns and two giant arches supporting the central domes. An international team that includes Ugo Tonietti, a professor at the Department of Architecture has been working on its conservation since 2007.

It must have been magnificent, with its nine domes studded with lapis lazuli, but an earthquake made it collapse just a few decades after its construction. The only remains of Noh Gonbad, the mosque erected in the eighth century (about a century and a half from Hegra) near Balkh, in the north of Afghanistan, are the outer walls and columns and two gigantic arches supporting the central domes. The conservation works on the site have been ongoing since 2007, carried out by an international team that includes the collaboration of Ugo Tonietti, a professor at the Department of Architecture, who has been involved in the consolidation and restoration of the monument.

"Noh Gonbad is an exceptional example of religious architecture," says Tonietti, an associate professor of Building Science. "What once was a mosque is located in a region that in an ancient past was one of the hubs of trade between Europe and the East. Even in ruins, the monument has remained for centuries dear to Muslims but unknown to the scientific community. This was until a Canadian scholar, Lisa Golombek, discovered it during an archaeological study mission in 1969."

The monument (in the picture below) is a structure made up of several materials (crude ground, crude bricks and cooked bricks) entirely covered on the inside surfaces by a finely carved plaster layer that has suffered the damage of time but not the iconoclastic attacks of the Taliban. Much of the exceptional colorful vaulted ceilings in lapis lazuli pasta, of which Afghanistan is rich, are lost (now hidden among the debris accumulated during the collapse) but there are numerous decorations on walls and arches, testimony of the religious iconography of the area.

"The archaeological site has been managed by the French Archaeological Delegation (DAFA) since the 1970s and in 2007 they involved me, thanks to the concern of the Italian Association Giovanni Secco Suardo (another essential partner of the Project) and for the international credit that Italian universities enjoy in these disciplines, guiding me in the first of many missions I have carried out in Afghanistan, with less risks than we might think, over the last 10 years, comments Tonietti.

In the study phase of the static and conservative aspects, we have also performed physical and mechanical tests on materials and structures, partly in the Department of Architecture's laboratories, partly in the ICVBC-CNR in Florence. In 2010, the international team proceeded to the intervention stage, which involved the Aga Khan Trust for Culture, under whose responsibility, and thanks to its fundamental territorial roots, the site was opened. The US Embassy in Kabul played a fundamental role as a donor for the project.

The restoration, which has allowed in the first phase to consolidate arches which were at risk of collapse, will continue in the coming years on the perimeter walls. "The goal of future interventions," Tonietti explains, "is to eliminate the thick layer of debris that has guarded the site for centuries, cataloging the decorations still buried, and restoring the monument in the spatiality of its original architecture."

The studies and the work done to date have originated the volume "The Nine Domes of the Universe", curated by the Ministry of Information and Culture of Afghanistan, the AKTC, the DAFA, the Department of Architecture of the University of Florence, the World Monuments Fund and the Giovanni Secco Suardo Association. The work - presented last 18th October in Rome at the Ministry of Heritage, Culture and Tourism - also offers a wealth of highly evocative photos taken by Josephine Powel and various scholars over the last decades, along with interpretations and archaeological reconstructions as well as the contributions dedicated to the interventions carried out to date. 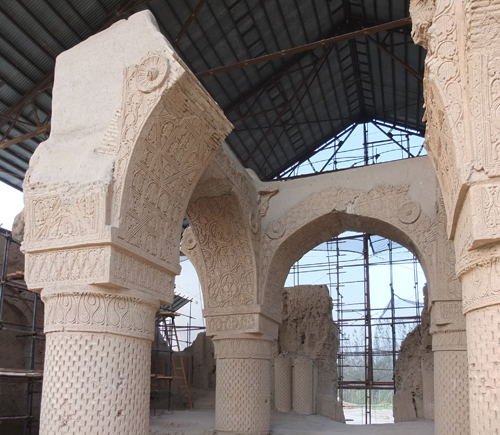